The City of Whittier has a diverse and colorful history beginning with the Gabrielino Indians who first inhabited the area during the City’s pre-history. Later, Spanish California (1769-1821) would influence the region with the establishment of both missions and large ranchos. It was the Spanish land grant given to retired solider Jose Manuel Nieto in 1784 that would encompass part of present day Whittier. After Mexico gained her independence from Spain, she ruled California (1821-1848) during an era of thriving ranchos. Mexico continued the Spanish practice of granting land to citizens in good standing to encourage settlement in California. This was accomplished by secularizing the old Spanish missions and dividing up the mission lands to establish new ranchos. In doing so, it ended the influence of the California mission system on the region’s inhabitants. One of the recipients of these Mexican land grants was Juan Crispin Perez, who established Rancho Paso de Bartolo in 1835. Perez’s rancho would later form part of the future City of Whittier.

The red arrow identifies the location of Rancho Paso de Bartolo, a portion of the future City of Whittier (Source: Whittier Historical Society)

When Mexico’s rule of California ended in 1848, American westward expansion and settlement into California began in earnest due to such influences as the discovery of gold in the west and the U.S. Homestead Act of 1862. The Homestead Act streamlined the process of granting public land to private owners. The earliest grantee of Homestead Act land in present day Whittier was German immigrant Jacob Gerkins, who acquired 160 acres in 1868. Gerkins built a small home on the property that is still partially extant today and forms part of the historic Johnathan Bailey House. 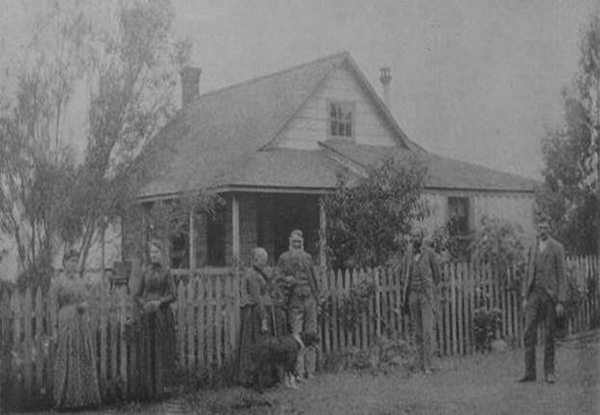 Johnathan and Rebecca Bailey (center) outside of their home, circa 1900 (Source: Whittier A Picture Postcard History)

One of Gerkins’ neighbors at the time was Pio Pico, the last Mexican Government appointed Governor of California. Pico purchased Rancho Paso de Bartolo in the early 1850s and re-named it “El Ranchito.” The ranch house is now a State Historic Park in Whittier.

By 1879, Gerkins sold his property to John Thomas, who established a 1,259-acre ranch in present day Whittier. The Thomas Ranch was subsequently sold in 1887 to the Pickering Land and Water Company who subdivided the ranch and sold lots to establish a “Quaker Colony” under the stewardship of Johnathan Bailey, John Painter, Hervey Lindley, Aquila Pickering and T.E. Newlin. Although Whittier was established on Quaker (Friends) principals, the Pickering Land and Water Company often donated land to non-Quaker congregations to develop their churches as well. The Company also reserved 20 acres of land for a future college that would later be named Whittier Academy or Whittier College as it is known today. Since then, schools and churches have been an integral part of the community. It was during this period that the Whittier State School, later re-named the Fred C. Nelles Youth Correctional Facility, was also developed. Whittier pioneer Hervey Lindley facilitated its development in 1891 by the State of California (at an estimated cost of $150,000) as a means of providing jobs and growth for the new community. In 2004, the facility was closed by the State of California. As the community’s Quaker foundation soon took root, it led to the City of Whittier’s incorporation in 1898 with 585 residents. The City’s name was chosen to honor the 19th Century Quaker poet, John Greenleaf Whittier. With the community’s early growth and prosperity tied to its agriculture (lemons, oranges and walnuts) and oil industries, the successful conveyance of water into the community in 1890 by Simon Murphy’s East Whittier Land and Water Company along with the arrival of the Southern Pacific, Pacific Electric and Santa Fe Railroads all provided critical infrastructure to enable Whittier to thrive into the 20th Century. 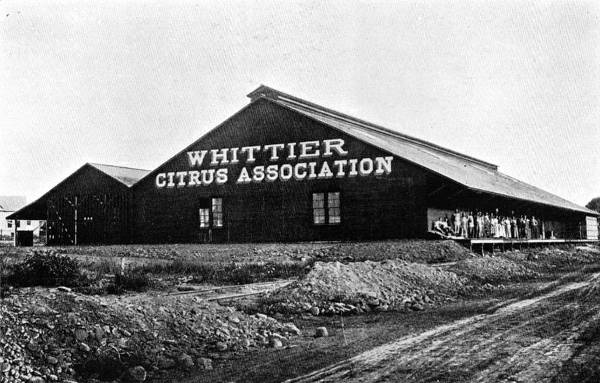 The Southern Pacific Railroad Depot, circa 1890 (Source: City of Whittier)

As Whittier’s population steadily grew to 14,822 by 1930, so did the diversity of goods and services provided within the City along with the rise of substantial new public and private buildings like the Murphy Memorial Hospital (1921), First National Bank (1923), and the Hoover Hotel (1930). Most of Whittier’s new development during this period still remained concentrated in the greater Uptown area, with residential development becoming increasingly dense around the City’s commercial core.

During the 1920s and 1930s, residential and commercial development was becoming increasingly geared toward accommodating the automobile. This became evident as residential garages replaced barns and streets were widened and paved with parking spaces to accommodate automobile traffic as the use of public rail for transportation waned and eventually ended in Whittier by 1938. This ultimately gave rise to the automotive commercial-retail strip that became the primary expression of the automobile’s impact on the mid-20th Century landscape in the City and resulted in the explosion of development away from the greater Uptown area in favor of Whittier Boulevard and other surrounding street thoroughfares.

Like other communities, Whittier’s growth slowed during the Great Depression (1929-1941). However, the City’s agriculture and oil industries remained active. Although new construction was limited during this period, the federal Works Progress Administration (WPA) provided assistance with funding and jobs for public projects. An example of the WPA’s work in Whittier is readily found in the numerous improvements constructed throughout Penn Park that are still used today.

Although the City’s agriculture and oil industries declined after World War II (1939-1945), Whittier’s growth continued to accelerate as distribution and manufacturing became important industries in the community because of its proximity to Los Angeles, major road networks and a large worker population. New construction also flourished during this period.

Between 1940 and 1960, Whittier’s population more than doubled from 16,115 to 33,663 residents. Vast new tracts of residential homes and apartment buildings were being developed in conjunction with commercial, industrial, medical and institutional uses that were replacing the former agricultural land and oil fields that were once the backbone of Whittier’s economy.

By 1970, the City’s population climbed to 72,863. Several annexations of unincorporated areas into Whittier during the 1950s and 1960s were partially responsible for this large population increase. Whittier was also experiencing the same kind of rapid growth that was occurring throughout Southern California after World War II. This growth was induced in part by an influx of returning soldiers, new families moving into California and rising birth rates. The City was now a firmly established bedroom community with a well-developed infrastructure and the ability to provide its residents with numerous goods and services. However, to maintain the aesthetic appeal of the City and to entice new growth and development into the community, rehabilitation and redevelopment would play a major role in the future of the City as the 1970s dawned in Whittier.

To learn more about Whittier’s history, there are many good books on the subject available at the Whittier Central Library and at the Whittier Historical Society and Museum. Suggested books include: