WHITTIER, Calif. – The Los Angeles County Department of Public Health has issued a new "Safer at Work & in the Community" Health Order allowing for the resumption of faith-based services, in-store shopping at most retail businesses, drive-in movies and other recreational activities. (Read latest information here)

The Whittier Police Department began in April, 1917 with the appointment of Edgar L. Essley as the community's first City Marshal and Tax Collector. A night watchman was hired the following year, and the 2-man team worked out of a building on Greenleaf and Hadley which also housed a drugstore, the County Marshal's office, a justice of the peace, and served as a courthouse. A 2-cell jail was located at the rear of the fire station on South Comstock.

LeRoy Ballou served as Chief of Police, License Fee' Clerk, and Supervisor of Garbage Collection from 1921-23, when he was succeeded by I.B. English. An Assistant Chief, a night sergeant, and seven motor officers were soon added, and the department moved to its new quarters, a room at the rear of the City Hall. 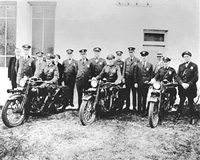 On May 12, 1925 Edgar Essley was sworn in for a second time, on the same day the department moved into its own building at the corner of Greenleaf and Bailey. It included a 7-cell jail and is still remembered as "the old Bailey Street station.

By 1931 the department boasted three administrative officers, a traffic sergeant, Superintendent of Identification, three motorcycle Officers, six Patrolman, and one Detective. Within two years after Guy Welch was sworn in as chief in 1935, patrol cars were equipped with two-way radios, and the lifting of fingerprints from crime scenes was standard procedure. 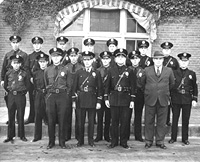 O.C. Smith became Whittier's sixth police chief in 1938. Although his predecessors had arrested mostly drunks and transients, by 1940 the department traffic problems, burglaries and juvenile delinquency were all in a day's work for WPD officers. Following World War II the department grew larger and more sophisticated. Officer standards were raised, and the importance of continuing education recognized. In 1954 Arthur Mallory was sworn in as Chief, and in 1955, the department moved into its present Painter Avenue site.

Ebert McKinney was sworn in as Chief in 1960, and within a year the annexation of East Whittier doubled both the city's size and population. In 1962 young men between the ages of 18-21 considering a career in law enforcement were recruited as cadets to serve as non-sworn personnel, primarily in Dispatch. Many went on to become sworn officers. By 1965, the force numbered 78 sworn officers and 20 civilians. 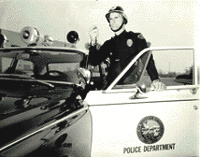 In the 80's came Community Policing with Neighborhood Watch programs, educational puppet shows for school children and senior citizens, A D.U.I. program reduced the number of drunk driver arrests, the first department K-9 dogs went into action and the department worked with other local law enforcement agencies to curb drug trafficking. In 1989, after 40 years, Uptown Whittier again had a foot patrol officer.

When Charles B. Hoover was sworn in as Chief in 1990, the war on drugs and gangs remained a top priority. In 1993, an Uptown Bike Patrol began covering the Uptown business Section, and a Mobile Command Center began operating at Broadway Park. In July of 1995, 29 new officers were sworn in as the department added the City of Santa Fe Springs to its jurisdiction. Three Community Response Centers; one on Greenleaf Avenue, one on Lambert Road and another in the Whittwood Shopping Center, provided a closer link with residents.

In 2001, Chief David M. Singer was sworn in to lead the Department. Chief Singer came to Whittier with many years of law enforcement experience including holding the position of Chief of Police at Signal Hill. Since his arrival, many significant accomplishment have been reached by the Department and the community. The implementation of Public Service Area policing created a system that held the Department accountable to the community for the resolution of ongoing neighborhood problems. It also provided a more efficient and effective way to deliver police services to the community. Under Chief Singer, the City enacted the first ever gang injunction against the criminal street gang "Whittier Varrio Locos". Chief Singer also implemented numerous technological advancements such as the graffiti tracker system, the automatic license plate hunter and the installation of remote cameras to monitor high risk locations.

The WPD employees and volunteers take pride in living up to the department motto: Quality People - Quality Service.