The Whittier Police Department complies with the Prison Rape Elimination Act of 2003 (PREA) and has established standards to prevent, detect, and respond to sexual abuse, harassment and retaliation against arrestees in the Whittier City Jail Type I facility.

If you would like to report sexual abuse and/or sexual harassment on behalf of a detainee or prisoner in the Whittier City Jail contact the Jail Supervisor at 562-567-9221 or the Jail Manager at 562-567-9211. 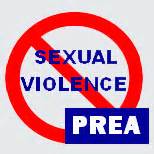